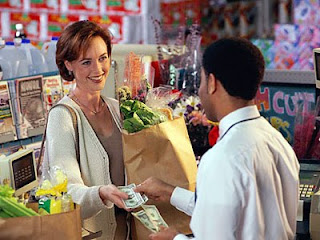 A few years ago, I was hired by a large supermarket chain to lead a customer service program - to build customer loyalty. During my speech I said, "Everyone of you can make a difference and create memories for your customers that will motivate them to come back. How? Put your personal signature on the job. Think about something you can do for your customer to make them feel special - a memory that will make them come back."

About a month after I had spoke, I received a call from a 19 year old bagger named Johnny. He proudly informed me he was a Down Syndrome individual and told me his story.

"I liked what you talked about!" he said, "but at first I didn't think I could do anything special for our customers. After all, I'm just a bagger."

Then I had an idea!" Johnny said. "Every night after work, I'd come home and find a thought for the day. If I can't find a saying I like, " he added, "I just think one up."

When Johnny had a good "Thought for the Day,", his dad helped him set it up on the computer and print multiple copies. Johnny cut out each quote and signed his name on the back. Then he'd bring them to work the next day.

"When I finish bagging someone's groceries, I put my thought of the day in their bag and say, "Thanks for shopping with us."

It touched me to think that this young man - with a job most people would say is not important - had made it important by creating precious memories for all his customers.

A month later the store manager called me..."You won't believe what happened. When I was making my rounds today, I found that Johnny's checkout line was three times longer than anyone else's! It went all the way around the frozen food aisle. So I quickly announced, "We need more cashiers; get more lanes open!" as I tried to get people to change lanes. But no one would move. "

The store manager continued, "It was a joy to watch Johnny delight the customers. I got a lump in my throat when one woman said, "I used to shop at your store once a week, but now I come in every time I go by, because I want to get Johnny's "Thought for the Day."

A few months later, the store manager called me again..."Johnny has transformed our store. Now when the floral department has a broken flower or unused corsage, they find an elderly woman or a little girl and pin it on them. Everyone's having a lot of fun creating memories. Our customers are talking about us...they're coming back, and bringing their friends. "

A wonderful spirit of service spread throughout the entire store...and all because Johnny chose to make a difference! Johnny's idea wasn't nearly as innovative as it was loving. It came from his heart - it was real. That's what touched his customers, his peers...and those who read this story. Great service comes from the heart...Will you be a Johnny today?
Posted by Shane Dreiling at 10:46 PM